Confor has set out its aims for the next Government in a simple, three-point plan to plant more trees, manage our woods better and use more home-grown wood.

Chief Executive Stuart Goodall said the parties' manifestos showed forestry and wood had moved up the political agenda significantly - but that there was a lot of work to do to make the commitments happen.

Mr Goodall said: “This has been called the climate election and it is heartening to see the main parties have listened to the forestry and wood processing sector's consistent call for more tree planting - to help tackle the climate emergency but also to stimulate the rural economy, help reduce flood risk and encourage biodiversity.

"Many of the main parties' planting ambitions are closely aligned to Confor's Woodland Carbon Targets, published this year - and they also draw upon recommendations by the Committee on Climate Change (CCC UK)." The CCC UK has identified tree planting and wood use as a "simple, low-cost option" to removing atmospheric carbon and reducing the damaging impacts of climate change.

Mr Goodall welcomed some big commitments by the main parties to new planting. The Conservatives say they will "triple UK tree-planting rates to 30,000 hectares every year", while the Lib Dems have pledged to "plant 60 million trees every year, increasing UK forest cover by 1 million hectares by 2045.

Although Labour did not specify targets in its manifesto, it later pledged to plant two billion new trees by 2040 - which equates to 100 million new trees a year from 2020, or around 50,000 hectares per year.

The SNP says it is "working towards a target of 60 million trees planted annually in the UK by 2025, with 30 million of these in Scotland to help tackle the Climate Emergency and to support biodiversity and rural employment".

"It's great to see the huge ambition, but to actually drive up planting rates across the UK, we need a clear delivery plan. What has made a difference in Scotland is strong political leadership, improved approval processes, joined-up policy and positive collaboration between the public, private and voluntary sector. While there are some bold commitments in the manifestos, we need a real cultural change for this to happen in England, Wales and Northern Ireland.”

The Confor manifesto calls for the next party of Government to deliver on the pledge to plant a new forest in Northumberland - and to create regional forest partnerships elsewhere in England and Wales to plant more forests at scale.

Mr Goodall also welcomed the enhanced focus on planting in the manifestos produced by the Green Party and Plaid Cymru - with the Welsh nationalists' manifesto mirroring closely Confor's planting plans for Wales.

However, Mr Goodall added, the manifesto is not just about new planting. He said: "It also calls for our existing woodlands to be better-managed, to unlock their potential to deliver a wide range of benefits.

“Finally, using more home-grown wood will displace energy-intensive (and therefore carbon-intensive), materials in construction and around our homes .”

The manifesto also stresses that modern, mixed-species forestry can deliver on a whole range of economic, environmental and social agendas. It can be found on the Confor website here - and Confor is encouraging members to share it with politicians and other interested parties. 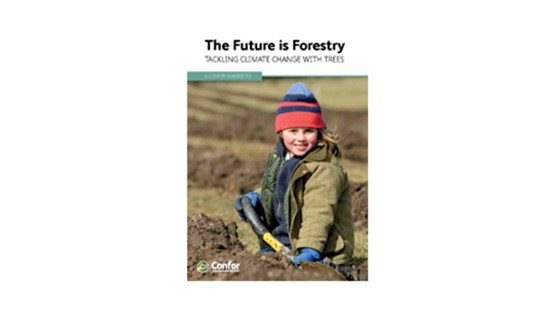