The UK has to take responsibility for growing more of the wood it consumes, and not rely on importing most of its timber from countries that might have lower forestry standards.

That was the conclusion of Confor Chief Executive Stuart Goodall at the latest meeting of the All-Party Parliamentary Group on Forestry and Tree Planting.

The meeting was discussing the question Do the new tree planting statistics tell us the UK's 30,000-hectare target won't be met?

Mr Goodall said: “We are really going to struggle to deliver that 30,000 hectare target; I cannot see how it is going to happen.”

The target is for new annual planting across the UK by 2024-25 - a Conservative Party manifesto commitment in 2019 - but current planting is at less than 13,500 hectares annually and Mr Goodall has said there is “a mountain to climb” to get there.

He told the APPG: “We are not reflecting on the major challenges we face; [very low] wood supply, decarbonising industry and tackling climate change. We can see the global context and evidence base and we know we can grow trees - hardwoods and softwoods - really well in the UK, and we do it to really high standards. 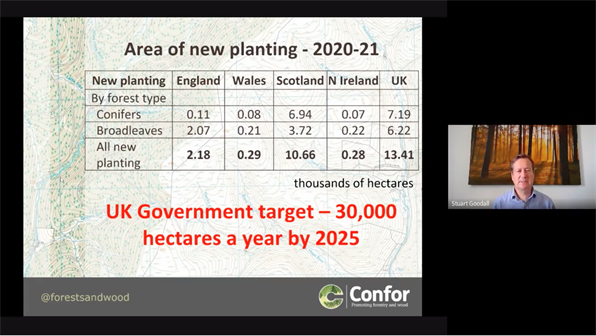 “Overseas, some countries have similar high standards but many do not - so we need to take more responsibility here to produce more wood.”

Mr Goodall painted a “startling picture” of declining wood supply in the UK from the 2030s, against a backdrop of estimates that global timber demand will treble by 2060.

Current planting was very much being driven by Scotland, with Wales figures disappointing. Despite clear interest from farmers and landowners to plant more trees and funding available, clunky processes were holding back any real improvement. Realistically, England needed to triple planting rates in the next four years, he said.

Caroline Ayre, Confor’s National Manager for England, said the recently-published England Trees Action Plan had plenty of positive things to say about wood use, skills and rural jobs - but lacked enough ambition. To satisfy the “insatiable demand” for wood products, to decarbonise construction and tackle climate change, a majority of softwood planting was needed.

“We need to grow more wood for what we use, and that means softwood,” she said. “Yet the plan talks about a majority native broadleaf planting. We already have had significant amounts of broadleaf woodland planted, but very little planted of it to produce wood.”

She said Confor was committed to working with all partners to set up a new Industry Leadership Group in England and to create an industrial strategy for forestry to sit alongside the Action Plan.

Eilidh Forster of Bangor University spoke at the meeting about her new research paper, which concluded that productive forestry has a significant part to play in mitigating the impact of greenhouse gases - and deserves a “prominent role in climate policies”.

She said: “Commercial forestry can deliver significantly more net carbon benefits than more natural broadleaf systems in the same time period, up to two and a half times more in some cases.” (read the story and link to the report here).

The event also heard from APPG Vice-Chair Lord Carrington, who discussed woodland management challenges - and said although grey squirrels were undoubtedly a huge problem for broadleaf woodland, there was no appetite among the general public for their complete extermination. Watch the full video of the event here.