One of the towering figures in the modern forestry and timber sector has been named as the winner of Confor’s Dedicated Service to Forestry Award for 2017.

Tom A Bruce-Jones CBE was presented with the award by Cabinet Secretary Fergus Ewing at Confor’s annual dinner in Edinburgh - after Mr Ewing reinforced his strong and continued support for the industry. 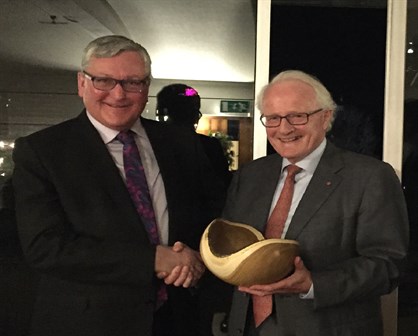 Mr Bruce-Jones worked in the global pulp and paper industry for 18 years before joining the family saw milling firm, James Jones & Sons, in 1979. He served as Managing Director, became the first Forestry Commissioner from the wood processing sector and also served as Chairman of Scottish Woodlands Ltd.

Mr Goodall praised his “great achievements” at James Jones & Sons (JJS) as well as his significant success in establishing the Stella-Jones joint venture in Canada, a business which has grown in value from 40 million Canadian dollars (C$) to more than $2 billion today (in excess of £1.2 billion).

Tom A Bruce-Jones said the growth of Stella-Jones had been an “extraordinary story” and said only a fantastic team at JJS had made success possible at home and abroad. He said this success was built upon "a culture of hard work, supreme loyalty and fun”.

He praised Stuart Goodall and Confor for strong leadership and for raising the profile of the sector and thanked Fergus Ewing for his support for, and understanding of, the forestry and timber industry and its long-term nature.

Earlier, Mr Ewing said forestry contributed massively to rural Scotland - including in his own constituency of Inverness and Nairn - and that he was taking a carpe diem approach, to seize the day and help the industry realise its full potential.

The Cabinet Secretary for Rural Economy and Connectivity highlighted recent additional funding support from the Scottish Government, including £5m extra for the Strategic Timber Transport Fund, another £4 million for new planting and an increase of £400 per hectare to stimulate further planting of broadleaf trees in the Highlands.

He also stressed the crucial work of Jim Mackinnon whose report is designed to “speed up and simplify the process of gaining consent” for new forests and woodland. Mr Ewing said: “Investors want, and are entitled to expect, rapid decisions, and if there is a problem, applicants want to know quickly, not in three years. We need to attract investment and I want to attract it, sustain it and see it invested in rural Scotland so jobs are created and the economy continues to grow.”

Mr Ewing concluded: “More important than any rhetoric is the shared human endeavour and shared purpose we have [in growing the forestry and timber sector]. Human endeavour drives business forward and an iron determination to see things happen drives action at a political level. With our joint effort, side by side, we shall succeed.”

Stuart Goodall said: “Confor and its members are happy to provide the human endeavour Fergus Ewing identified as the driving force of our industry. In less than a year in office, he has had an extremely positive impact and we look forward to a continued strong and mutually supportive relationship to push up planting rates. Fergus Ewing understands the long-term nature of our sector and recognises that supporting it can have a really positive long-term impact on Scotland's economy, environment and communities.”