Storm Arwen: update on impact on forests and woods

A fuller picture of the impact of Storm Arwen should be available later this week when satellite images reveal more clearly how badly forests and woodlands have been affected.

Confor’s best estimate, based on feedback from a wide range of sources, is that in excess of one million cubic metres of timber has been blown down in Scotland - around 20% of the annual harvest.

In England, the estimate is half a million cubic metres of timber - mainly in Northumberland, but also in Cumbria.

Confor has been asked for comment in the wake of the storm damage, with Deputy CEO Andy Leitch interviewed on the BBC's Good Morning Scotland (listen from 1,16,56) and Jamie Farquhar, National manager for Scotland, quoted in this prominent story in The Scotsman.

Mr Farquhar said: “Many of the forests affected are hard to access and we won’t have a full picture until Forest Research can complete its analysis  of satellite images in the coming days.”

The areas worst hit by the storm of 26/27 November are Aberdeenshire, where mainly Scots pine and spruce have been affected, and the Scottish Borders, particularly east of the A68 (where mainly spruce has come down).

Perthshire, Angus and Dumfriesshire, including the Forest of Ae, were also affected. 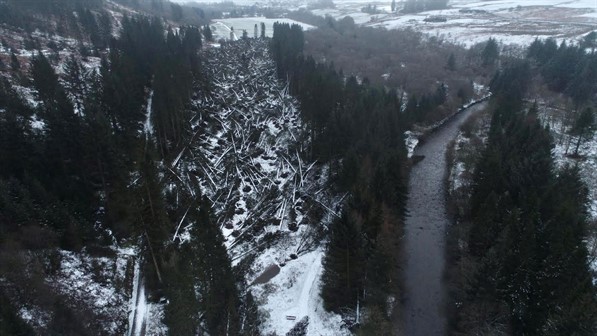 Confor is working constantly with its members and the public forestry bodies to continually update the picture.

Mr Farquhar said in economic terms, the impacts of the storm were likely to be largely short-term, but potentially significant.

He added: “Species like Scots pine degrade quickly after windblow and trees that have snapped rather than completely blown over will have little or no value if they are not harvested quickly.

“To achieve this goal, it is important that Scottish Forestry is adequately resourced - in terms of both people and funding - to deal speedily with these applications and normal business.”

As more accurate information on damage emerges, this will be analysed by species and size, and discussions will be held with timber processors and the biomass sector as to how they can take in such an unexpected crop.  Managers will already be making plans to decide how to divert existing operations to windblown crops, but this will be slow business as the contracting resource is finite in this country and already stretched to deal with normal harvest programmes.

Mr Farquhar said that apart from the damage to productive forestry, there had been “a tragic loss of many iconic trees which will change the landscape of some regions for decades”.

Confor will continue to work closely with all parties to try to address all of the problems arising from Storm Arwen in a structured way, Mr Farquhar concluded - including working with Scottish Forestry to fast-track felling permissions for windblown trees.

For the latest on felling permissions, visit the Scottish Forestry website here