A call by a Conservative MP to plant 200 million trees in England by 2020 to help prevent future floods has been welcomed by the forestry sector.

The vice­chair of the All Party Parliamentary Group on Forestry made her call against the backdrop of the devastating floods in North­-west England and said hugely increased planting could help reduce flood risk in the long term.

Stuart Goodall, Chief Executive of Confor: forestry and wood ­ the sector's trade body, said: "The terrible floods, especially in Cumbria, demonstrate that Government has to look at more than just flood defences. We need to hold rainwater in the hills so that the peak flow of water is reduced, helping flood defences to do their job.

Mr Goodall added: "Anne ­Marie Trevelyan MP has made a sensible suggestion which is backed up by scientific evidence produced by the government's Forest Research agency. I will be writing to Secretary of State for Environment, Food and Rural Affairs Liz Truss MP asking her to give careful consideration to this proposal and offering our help to look again at how planting more trees can help reduce flood risk in the light of the weekend's devastating floods".

During the House of Commons debate on flooding, Anne Marie Trevelyan MP said: "In the light of the floods in Cumbria and elsewhere, I am pleased to say that flood defences provided security and protection, as they were supposed to, in north Northumberland. Will the Secretary of State consider, as a matter of urgency, increasing the number of trees we plan to plant during this Parliament from 11 million, which equates to only one tree for every five people, to some 200 million, which equates to five trees for every person?

"They would cover some 50,000 hectares, much of which could be in the upland areas of river basins, to help nature to hold water and to reduce the risk of flooding in the long term."

In her response, Secretary of State Liz Truss MP said: "I completely agree with her about looking at the environment on a catchment level and making sure that we put in place tree­ planting programmes that can both reduce flood risk and improve the environment at the same time."

Confor has already highlighted the need for the UK Government to be far more ambitious in its tree planting targets. In November it joined forces with leading woodland conservation charity The Woodland Trust to call on the government to commit to planting planting 7000 hectares (ha) of woodland every year until 2020 (around 15 million trees per year) and then to increase that to 10,000 ha per year when the next Government is elected in 2020. 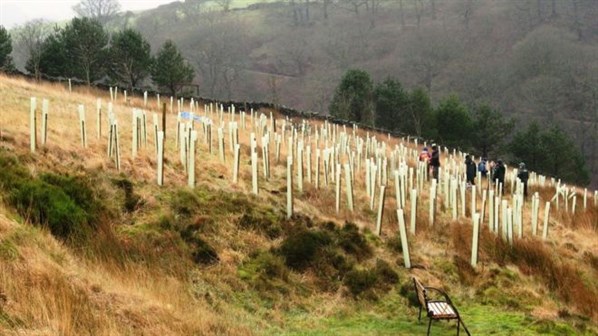