Commercial tree planting has a central role to play in tackling the climate emergency, a member of Labour’s Defra team told a Confor event at the party’s conference.

Sandy Martin MP, speaking at the Trees and the #ClimateEmergency Fringe, said a wide range of solutions were needed to tackle the crisis, adding: “Commercial forestry, done properly, is one of the best ways of doing that.”

The event heard that more than 80 per cent of UK planting in 2018/19 was undertaken in Scotland, with England lagging far behind. “We need to look at the regulatory regime and the attitude of government and ask why some areas are planting much more than others,” said Mr Martin.

He also said there was “enormous scope” for using far more timber in building in this country.

Both Mr Martin and High Peak MP Ruth George said Labour would be far, far more ambitious in its manifesto pledge on tree planting for the next election. In 2017, it only committed to planting one million trees. 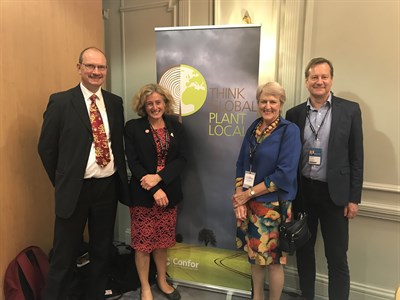 Ruth George said her family had planted 270 trees at their home in Whaley Bridge, which had helped to protect her own home from flooding. Reflecting on the wider issues raised by the evacuation of the North Derbyshire village after the dam for the Toddbrook Reservoir threatened to collapse this summer, she said: “Looking at the long-term solutions, tree planting on the high slopes of the catchment area has to be the easiest way to stop the flows coming down from the hillsides.”

Stuart Goodall, CEO of Confor, challenged Labour to match its words on tackling climate change and to be far more ambitious on tree planting and the use of wood, highlighting that the UK is the second largest importer of wood products after China.

“A Labour manifesto needs to address the issue of wider land use - and show farmers who are feeling under pressure from all directions, that forestry is an opportunity, not a threat,” he added.

Half of the 11,200 hectares of woodland planted in Scotland last year covered areas of less than 50 hectares, which included significant farm planting. Event chair David Lee noted that farmers were increasingly seeing the animal welfare value of planting trees as shelter belts for livestock, in addition to the economic benefits of income from thinning trees and then harvesting a final crop.

Baroness Young, Chair of the Woodland Trust, also called for a massive increase in ambition by Labour which would see planting of 50 million trees per year for the next decade. She highlighted the #BigClimateFightback event, which will see more than a million trees planted across the UK on November 30th.