Martin Bishop, Confor's National Manager for Wales, has died in a flying accident at the age of 61.

Confor Chief Executive Stuart Goodall said that everyone was "totally devastated" by the news that Martin had been killed in the accident near Raglan in Monmouthshire, south Wales, on Sunday, along with his friend Roderick Weaver.

"Martin was widely known, extremely popular, thoroughly committed and highly effective in his role with Confor. We will all miss him terribly, both personally and professionally. Everyone at Confor and the wider forestry and timber industry sends our very deepest sympathy to his wife Angela and to all his family and close friends."

Martin joined Confor as National Manager in 2014, after working for almost 20 years as a timber buyer, first for Chantler Timber and then AJ Charlton & Sons.

Mr Goodall said: "Martin worked tirelessly for the forestry and timber sector in Wales and had really got the industry on to the political map. He had persuaded senior politicians of the value of productive forestry, established a Cross-Party Group in the Welsh Assembly and started a regular column in the Western Mail on forestry and timber matters. He was looking forward, as ever, to telling the forestry story at the Royal Welsh Show next month.

"Martin also had a rich life outside work - he was always full of stories about pretty much any subject you can think of. He had a passion for flying and loved to dance with Angela. He was a man who really made the most of his life, and the world will be a poorer place without him." 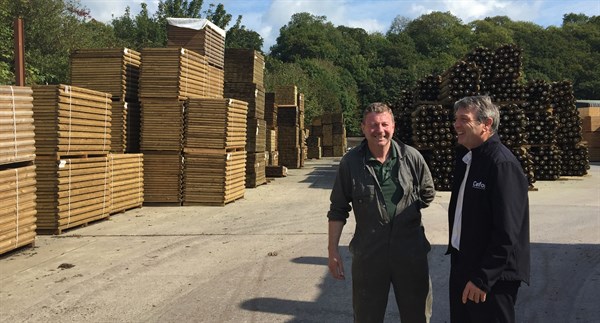