Building communities in the south of Scotland

Confor’s latest publication, Forestry and local economy, explores the impact of two large new woodland creation projects in the south of Scotland, concluding that the number of people living on the land has increased after trees were planted. 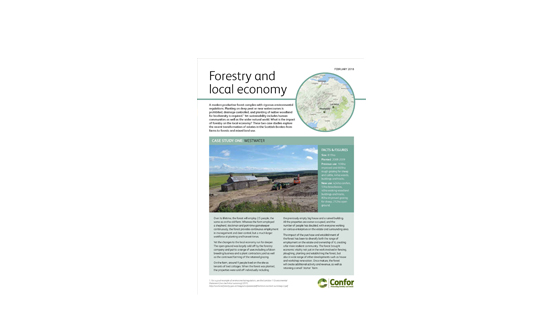 The publication analyses the number of people living on the land before and after tree planting took place at Larriston and Westwater.

Confor Chief Executive Stuart Goodall welcomed the report, “Concern has been expressed that, while tree planting is good for the environment and an economically attractive use of the land, it comes at the expense of people living on the land. We were keen to look into this further and studied recent schemes in southern Scotland.

“The results show that, in these examples, there are now more people living on the land than before the trees were planted.”

Around half of each site has been planted with timber, which is typical of recent woodland creation projects in Scotland. Over the forest’s lifetime, these will sustain around the same level of local employment as the previous farms, and when they begin to be harvested will sustain wider jobs at sawmills in the area.

But the importance of these projects for the local community goes far beyond the timber.

Empty and ruined buildings on the sites, and the open ground, have attracted new owners. This has diversified land ownership in the region and more than doubled the number of permanent residents. Small businesses including a falcon breeding business, agricultural plant contractor and holiday lets are flourishing, and farming continues on the open ground.

The forest is also helping to protect the old tile works in the Larriston Burn, and providing the opportunity for an archaeology interpretation walking trail.

Stuart Goodall said, “This is further compelling evidence of the benefit of forestry to the economy of south Scotland, and builds on the evidence of our 2014 study of the productivity and economic impact of Eskdalemuir.

“And the benefit to the community does not stop at the forest gate. James Jones has recently announced a £7m investment in its sawmill at Lockerbie, to secure its 141 jobs and improve its production of timber for sustainable Scottish construction.”

You can read or download the Forests and local economy case studies and the Eskdalemuir report of 2014 here.