Labour will make forestry integral to a whole range of policy areas in a “stronger, deeper” way, according to the party’s Shadow Environment Secretary.

Sue Hayman MP told a Labour Party conference event organised by Confor the lack of tree planting by the current Government, combined with the loss of woodland, meant the UK was "likely to be experiencing deforestation”.

Later, asked why the last Labour manifesto had committed to planting just 1 million trees, she said: “Let’s move away from targets and talk about policy that really makes a difference. Tree planting needs to be integral to an awful lot of what we are doing. We could say '30 million trees' and plant a lot of fast-growing willow, but we need to think about doing it stronger, deeper and better.”

The event asked Should the next Labour Government aim to double tree cover to tackle climate change? and Hayman said as well as climate change, the impact of tree planting on mitigating flooding, reducing soil erosion and physical and mental health meant we should “crack on and plant more trees”.

Sue Hayman said the Iggesund paperboard factory in her Workington constituency had to import a huge amount of trees from Scandinavia, with the resultant environmental impact. “We should look to grow more of our own timber and with the Common Agricultural Policy [CAP] going after Brexit, future payments should encourage more diversification of farming.”

Both Ms Hayman and North-East England MEP Paul Brannen are broadly supportive of plans to reward ‘public goods’ under a new environmental land management scheme to replace CAP, but favour ‘public benefits’ rather than ‘public goods’.

Brannen said forestry definitely demonstrated the public good of 'mitigating or adapting to climate change’. He said EU forest cover (averaging more than 35 per cent) soaked up 10 per cent of the whole EU’s carbon emissions: “It’s a huge carbon sink and if we can expand that [with more trees], we could soak up 11-12 per cent, or more. If we make more things from wood, we could push towards 20 per cent. 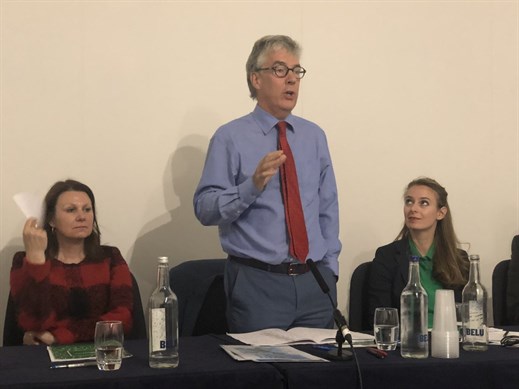 Brannen said breakthroughs in engineered timber meant we were able to build much higher with wood, from the historic 4-5 storeys to 18-20 storeys, in Norway and Canada. “We can build at height and scale and we have to do that to reduce dependence on concrete, because concrete and its manufacture is responsible for 8 per cent of global carbon emissions. If we keep building with steel, brick and block, we cannot meet climate change targets and might even go into reverse. The game changer is engineered timber, made in factories in the UK with 24-hour off-site production.’

However, he warned we were simply not growing enough trees, with forest cover in the UK only 13 per cent against the EU average of 35 per cent-plus: “We have to (at least) double tree cover and use much more timber in housing.”

India Bourke, an Environment  Writer for The New Statesman, said planting trees was essential to keep on track with the Paris Agreement on climate change, but thought it was important to consider other benefits of tree planting and not damage the environment by planting monocultures.

Stuart Goodall, Confor CEO, said post-war planting to produce wood had delivered “unintended consequences" for habitats and landscapes, but stressed: “We have not planted monocultures for more than 25 years. We see the mistakes of the past but we can’t show mature, modern, mixed forests yet because they are still growing. 25 years ago we signed up to the high-quality UK Forest Standard to ensure forestry would be economically, environmentally and socially sustainable.”

Mr Goodall added: “We won’t hit climate change targets unless we take carbon out of the atmosphere. We are talking about pumping carbon under the North Sea, but this is unproven and expensive - £500+ per tonne when it costs £20 a tonne to lock up the same amount of carbon in a tree.”

In a wide-ranging Q&A session, the panel took questions on tree-planting search engine Ecosia, the dangers of ash dieback, making local authorities plant trees, the challenging economics of importing wood safely by removing bark and the National Forest. Earlier, Beccy Speight, CEO of The Woodland Trust, said to achieve the NF target of planting 50 million trees in 25 years required “a mosaic of trees, from urban trees to large-scale commercial forestry”.

Nicky Gavron, London Assembly member and Chair of the Planning Committee, called for a re-appraisal of Green Belt policy as it had been designed before climate change and planting trees might be appropriate. She praised the Confor event for being "the most joined-up debate of its kind I have attended”.