The forestry sector must unite behind a positive vision of the future to grasp the unique opportunity presented by the re-shaping of rural policy and funding after Brexit.

UK Government plans for a new Environmental Land Management scheme (ELM) to replace Common Agricultural Policy direct payments are at an early stage - and the time to influence future policy is now, a seminar at APG 2018 heard.

Fair Play for Forestry discussed the prospect of a level playing-field as an ELM, which will reward land managers for delivering public goods, is designed.

Paul Brannen, Labour MEP for North-east England and a strong advocate of tree planting and building with timber, said: “Most people are not aware of the multiple benefits of forestry. You have to marshal arguments, make them accessible to the public and show the benefits by planting forests in the urban fringe, within 30 minutes of everyone in a city or town.”

He added: “The Fair Play for Forestry movement isn’t big enough at the moment but it could be. It’s a winnable campaign but we should re-calibrate towards blatant bias for forestry, because it can tackle the biggest single collective problem in the world, climate change.

“Carbon capture and storage is hugely expensive and staring us in the face is the opportunity to take carbon dioxide from the air by planting far more trees. We should aim to double UK tree cover.” He said Brexit offered forestry a window “to get out there and win the argument”.

Susan Twining of the CLA agreed: “The new ELM scheme won’t be fully developed until 2024. In the meantime, there will be a degree of economic pressure to allow businesses to take a long hard look at themselves. There is an opportunity for forestry to fill that gap.”

Sue Pritchard, Director of the Food, Farming and Countryside Commission, agreed there was a ‘window of influence' for forestry. It was vital, she said, to look at forestry and woodland in a broad context: “It’s not just about the rural sectors, it’s joining up all the different policy conversations, to understand more about how we align public money and private investment to deliver public value.”

John Tucker, Director of Woodland Creation for Woodland Trust, warned: “The sector can be too inward-looking. We need to grow up, come together and recognise the whole is greater than the sum of the parts and articulate better all the benefits that forestry offers.”

Sir William Worsley, the new Tree Champion appointed by Environment Secretary Michael Gove at Confor’s suggestion, said: "It’s exciting and there are opportunities we’ve not had for a long time. All parts of the sector must move in the same direction.”

At another APF seminar, a senior figure in the nursery sector warned of future supply challenges due to the significant increase in tree planting in Scotland.

Rodney Shearer of Alba Trees said: “Scotland will plant around 12,500 hectares this years and more than 15,000 next year. That will cause a major hiccup in the supply of trees. The number of trees available in the open market is quite curtailed due to the expansion in Scotland.”

John Tucker said the level of new planting in England was “an absolute disgrace”. The long-term objective of planting 180,000 hectares by 2042 [in the 25 Year Environment Plan] requires an average of 7,500 hectares planted annually – when it has taken five years to plant 7,500 hectares in England.

Several speakers welcomed the decision to keep the Woodland Creation Grant application window open all year. While welcoming the open window, Mr Tucker said: “It’s great that applications are open all year round but the user manual is 70 pages long. There are lots of investors ready to invest in forestry but they’re going to walk away unless the Forestry Commission can move more quickly.”

Forestry and the Bio-economy

Forestry can play a big part in the future bio-economy but strategic thinking is needed to provide the huge quantities of wood that will be needed.

Dan Ridley-Ellis of Edinburgh Napier University told an APF seminar: “Forestry will be at the core of the future materials campaign; it’s not the only source of biotic material but the only one that can deliver the volumes needed. However, those volumes are truly huge and we need to think more strategically about what we do with wood.

“People talk a lot about wood as an abundant material, but it’s actually not that abundant when you look for the quantity and quality needed.”

Jez Ralph of Timber Strategies agreed, saying we were removing too much of our softwood resource – around 80 per cent of the increment, against a suggested maximum benchmark of 70 per cent. “We’re taking out way too much and we are only just at the beginning of the revolution in the use of cellulose,” he said.

* For more detailed reports on the APF seminars, read October’s edition of FTN. 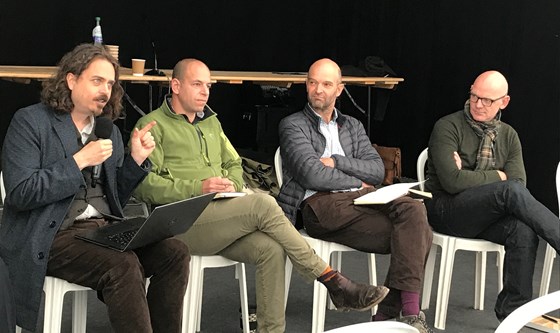