Letter sent to all Confor members:

As the Chairmen of Confor's England regions we are asking you to consider making a donation to support the breeding programme of Rhizophagus grandis which is used as a biological control for Dendroctonus micans, the Great Spruce Bark Beetle.

Forestry Commission aerial surveillance flights have picked up worrying levels of D. micans infestation across the west coast of England and into Scotland.  D. micans is fatal and the beetle attacks and breeds in all species of spruce grown in Britain.

The Public Forest Estate and the private sector in England and Scotland are entirely reliant on Forest Research for the provision of the larvae of the predatory beetle R. grandis. However in 2014 there was a complete failure of the breeding programme of R. grandis at Alice Holt and in Belgium which hosts a significant breeding programme.  Since the regulatory controls for D. micans were removed in 2005 the whole programme has been funded by Forest Enterprise England as part of its own investment in protection of the value of standing timber on the Public Forest Estate. Where Forest Research becomes aware of significant infestations elsewhere then, if excess R. grandis material is available, they will attempt to undertake releases in other woodlands.

Forest Research has put forward a proposal for financial support from the private sector to widen the breeding programme and secure a more resilient operation.  In addition to internal Forestry Commission funding to Forest Research through Service Level Agreements there is a shortfall of around £5,000 per year which, if covered by contributions from the private sector, would mean that the availability of sufficient quantities of R. grandis could be secured for the future.

The future health of spruce in the UK is seriously impacted by this situation therefore we are asking you to consider making a donation to support an annual commitment for five-years, or contributions towards a £25,000 target. We need urgently to release R. grandis into the infected areas, so that they become self-sustaining and bring D. micans to manageable levels.

We look forward to hearing from you.

On behalf of the Chairmen of Confor's England regional Committees 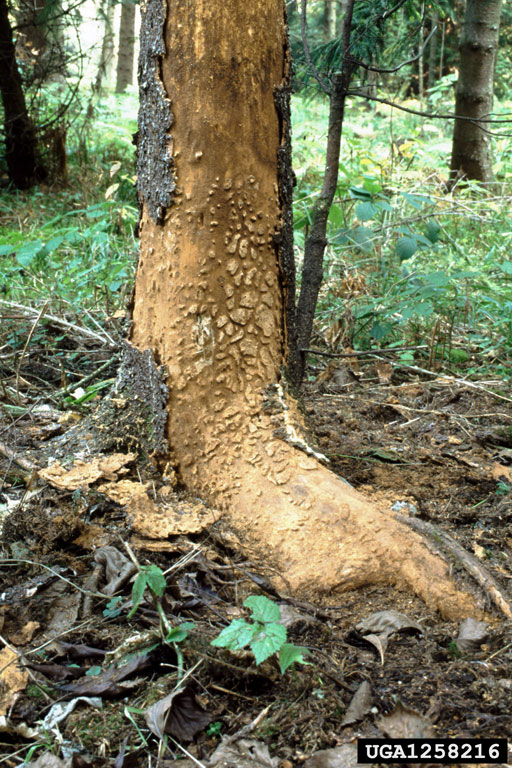